The Unchanged History of Soap

I first learned about soap making back in 3rd grade on an elementary school field trip to Old Sturbridge Village in Sturbridge, MA. I still have vivid memory of a woman in an apron and bonnet stirring a large black pot of oils over an open flame, then showing us rough cut, eggshell hued bars and teaching us the process behind how soap was made. 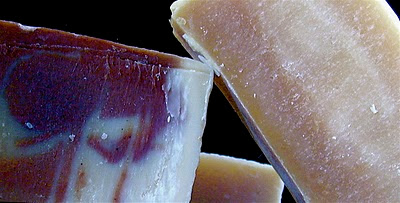 harvest crush syrah & summer crisp chardonnay wine bar soaps
© The Grapeseed Co.
I've been a bit obsessed/infatuated with learning about soap since introducing wine bars to The Grapeseed Co. line almost 2 years ago. I love that it's an age old process. I love the art of it. I love that no two swirls in the design are the same. I love the science behind changing liquids to a solid. I love the fact that true soap is made the same way today as it was thousands of years ago.
What is the story behind the history of soap?

According to wikipedia, the first soap recipe dates back to Ancient Babylon around 2800BC. It contained ashes, water, sesame seed oil and cypress oil. Shockingly similar to a soap recipe you'd find today that contains lye, water, vegetable oil and essential oil. Let me break this down for my non-soap making readers:

ashes and water = lye and water
sesame oil = vegetable oil
cypress oil = essential oil
Lye is made from ashes and water. Sesame is a type of vegetable oil and cypress is an essential oil. Thousands of centuries past; the recipe remains unchanged. Amazing. The word "soap" itself remains the same throughout history. Webster's says it comes from the Latin word sapo, simply meaning soap.

Ancient Egyptians added their spin on things by creating soaps made from both vegetable and animal oils, also known as tallow. In the late 6th century, there is evidence of the first soapmaker's guild in Naples; a tradition that remains strong today through organizations like the Handcrafted Soapmakers Guild here in the USA. By the 7th century, formulas evolved to include color and scent ingredients as well as liquid soaps as recorded in Nablus (West Bank), Kufa and Basra (Iraq). By the 15th century, France had ramped up production to supply the sudsy needs of their entire country in Provence and Marseille, where 2 soap factories existed. In the late 1700s-1800s soap making evolved into a legitimate industry in England where the same process was used, but they switched back to vegetable oils only to create the finest soaps.

Soap has always served one purpose, to clean things. Who knew something we use daily without much thought (unless you're a soap nerd like me) has had such a rich history and remained so unchanged over time? The cold process method we use at The Grapeseed Co. is basically the same method that's been used throughout soap's extensive existence! We may have tools today to make the process easier, but soap making is still the art and science of  saponifing oils. The soap making process has remained unchanged throughout history around the world- providing jobs and getting us clean!

learn more:
To learn more about what qualifies as real soap click here
How cold process soap is made here
and a timeline of soap throughout history here

McNeil, Ian (1990). An Encyclopaedia of the history of technology. Taylor & Francis.
Posted by Unknown at 8:27 PM